Latest News: The Ark Addendum - Ravage's Transform and The AllSpark Almanac Addendum!
In the Spotlight

Transformers Animated was the first Transformers show created in the United States since Generation One, and the first in North America since Beast Machines. Below you will find a full list of credits connected to the Cartoon Network series.

The first two columns are voice actors, where as the third column contains other credits related to the show.
cartoon credits
US Voice Actor
David Kaye - 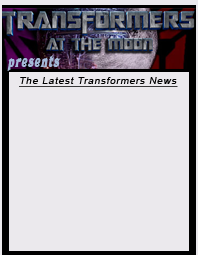